The Top 10 Best Walks in Devon 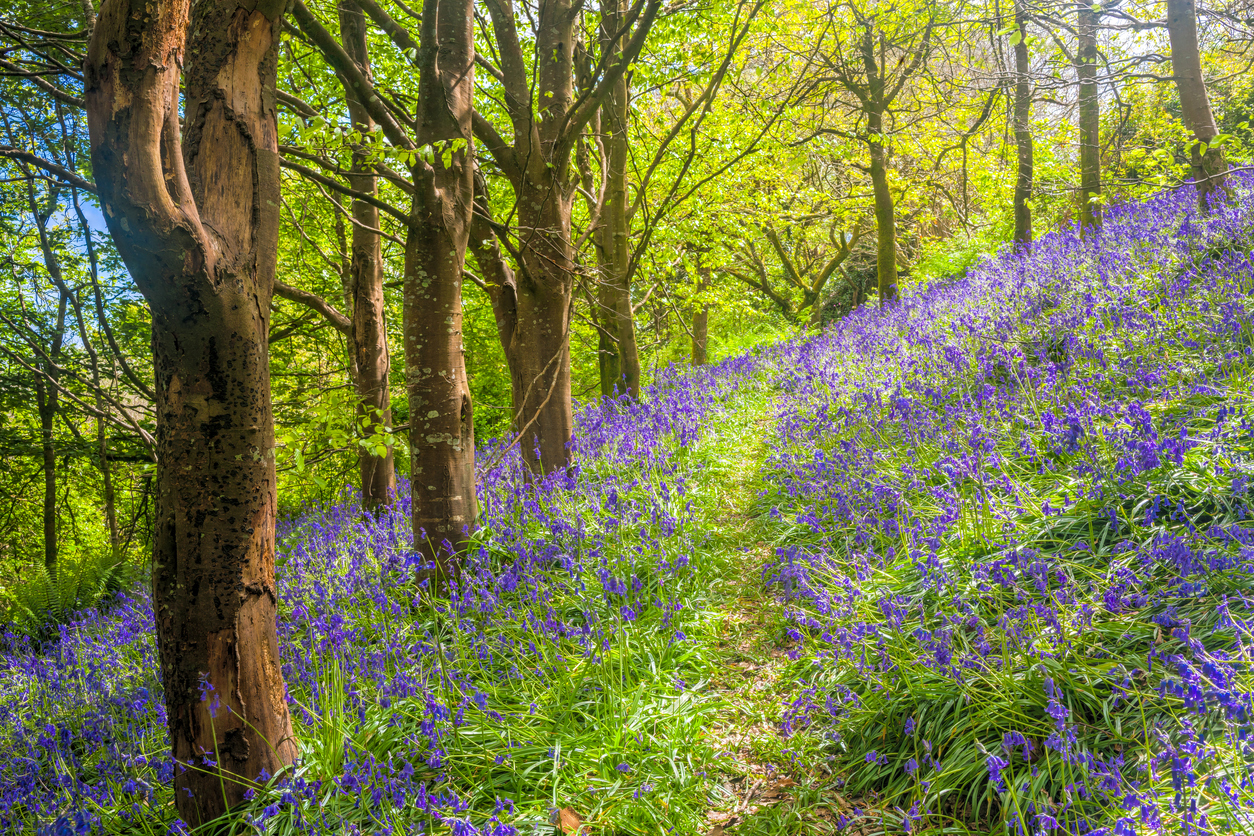 The Teign Valley is one of Dartmoor’s hidden gems: on one side the famous bleak high moor, on the other, the less well known eastern side, a series of steep-sided wooded valleys. The Two Moors way passes through it – for the truly adventurous this route, as the name suggests, goes from north to south Devon through both Exmoor and Dartmoor national parks. Fingle Bridge itself is a stunning setting, and a steep climb up Hunter’s Path rewards you with fantastic views from Castle Drogo out across the North Moor. In the castle’s cafe, Christine’s team do great cake. If you prefer to stay down by the river, the option to explore the Gorge on the Fisherman’s path is equally rewarding.

Wembury beach is a great spot for rock-pooling. Photograph: Alamy

This fascinating area used to be HMS Cambridge – the navy’s gunnery school. Since its purchase by the National Trust it has been lovingly returned to nature and is now a significantly more tranquil place. The views out to sea are spectacular and this is a great place to see the wide variety of craft that come and go from Plymouth. You get a great view of the navy’s Thursday War (the weekly war-fighting exercises) from here too. The bay back towards Wembury church is a top spot for rock-pooling adventures.

The area around Noss Mayo and Newton Ferres has some spectacular walks, this is one of my personal favourites. Gara Point is the wilder side of the Yealm; you pass some striking coastline, gorgeous woods and picturesque grazing, not to mention the options for good pubs – the Ship (nossmayo.com) and the Swan (swaninnnossmayo.co.uk), both in Noss Mayo, pull a fine pint. All of this is packed into a relatively compact area, the paths are good but the climb out of Noss Mayo is not for the faint-hearted. On a clear day, as you walk along Revelstoke Drive you can see across the mouth of Plymouth Sound, to Cornwall, and all the way out to the Eddystone Lighthouse.

This is a beautiful valley and beach that is tucked away – the route down to the cove passes through old sunken lanes, one of which was supposedly used by smugglers. The area is well known for its reptiles, which can often be seen basking in the sun. The cove itself provides hours of fascination; at low tide the vast rock pools are teeming with marine life such as blennies, anemones and starfish. The sand dunes, bound together with marram grass, are constantly shifting and home to sea sandwort, forming a lush green carpet bearing greenish white flowers in summer. The cove also has unique and colourful rock formations. The Journey’s End Inn (thejourneysendinn.co.uk) is a great little spot to stop once you’ve scaled the lanes.

This area is probably best avoided in the height of summer as the sheer number of people can detract from the outstanding charm of the place. That said, it doesn’t take long to leave the crowds behind. The headlands on both sides of the Salcombe estuary provide excellent walks. Catch the ferry from Salcombe and you can walk directly up the beautiful valley at Mill Bay, this opens up as you reach the top and is the start of a lovely walk to Prawl. The Pig’s Nose at East Prawl (pigsnose.co.uk) provides great entertainment as well as a welcome stop. On the opposite side, the area between Bolt Head and Bolt Tail has amazing views and the walk up from Salcombe to Overbecks is really stunning – as you climb up it is well worth looking back to take in views of the estuary.

Combe Point to Froward Point at the mouth of the River Dart. Photograph: Derek Stone/Alamy

The Dart estuary is a brilliant area to walk, and there is a good system of ferries which link Dartmouth, Dittisham and Kingswear, as well as options to travel further up the river to visit the brilliant Sharpham’s vineyard. My favourite walk is from Agatha Christie’s old house at Greenway along to Coleton Fishacre, right out on the end of the peninsula. You pass through Long Wood to join the Dart Valley Trail, the steam railway runs alongside and provides the perfect time machine experience, and once through Kingswear you join the South West Coast Path and your surroundings become more exposed. The walk to the old gun battery at Froward Point is spectacular, the views back across to Start Point and Slapton are breathtaking.

The route of the River Plym provides some amazing and varied scenery. Up on the High Moor it feels like you are in the middle of nowhere yet you are only a few miles north of Plymouth. The area of the upper Plym is littered with bronze age archaeology; there are barrows, hut remains and standing stones within a very short walk of the car park at Cadover bridge. Following the river south brings you to the Dewerstone, which takes its name from the Dartmoor legend of demonic hunter Dewer; the devil himself. When night fell, Dewer would hunt down people who were lost on the moor.  Accompanied by a pack of fearsome, ghostly dogs called Whist Hounds, Dewer would drive people to their deaths via a fatal fall from Drewerstone’s highest cliff. Thankfully these days Devil’s Rock is more commonly used for climbing.

Watersmeet is one of Britain’s deepest river gorges, where the lush valleys of the East Lyn and Hoar Oak Water meet. This entire area is a walkers’ paradise, with options to explore inland or take the coastal path along the cliff tops. Watersmeet House is now a great little cafe where you can refuel on an ample cream tea. The river is home to otters, salmon and the occasional brave kayaker. The varied terrain in this area is striking, but it is the wealth of wildlife which is the real treat: red deer, herons, wood warblers and jays all call this beautiful place home.

A beautiful walk through ancient woodland alongside the River Heddon to where it meets the sea on the north Devon coast, between some of England’s highest sea cliffs, framing an amazing view out to sea. Down on the beach you will find a restored 19th-century lime kiln. The coppiced woodland and meadows are specifically maintained to provide habitat for the high brown fritillary butterfly. The best season to spot them is between mid-June and early July. For those of an adventurous disposition, a steep walk down to Woody Valley provides a great opportunity to take a dip.

This part of the coast was once notorious for smugglers and wreckers. During the second world war it was a D-Day planning centre; today it is home to the Royal Marines amphibious testing centre. The walking around this corner of north Devon is great, stretching from the rocky headland of Baggy Point at Croyde to the rugged heights of the Tors of Ilfracombe, Lovely Woolacombe beach sits beneath the surrounding hills, miles of golden sand to wander along while watching surfers in action. You can scramble up the stegosaurus’ back of Morte Point’s wild headland, and if you’re really lucky you might spot seals basking in small coves below. This coastline also has a Victorian past – the Torrs Walk above Ilfracombe was created for the enjoyment of tourists many years ago, and you can see why this stretch of coastline has had such an enduring appeal.

Call Now
01934 823288
If you are looking for retirement or residential park homes for sale in Devon, be sure to get in touch and speak to a member of the Otter Valley team. We will gladly assist you.
Arrange A Viewing
Copyright © 2022. All rights reserved.